Usain Bolt Touts E-Scooters That Would Run Slower Than Him 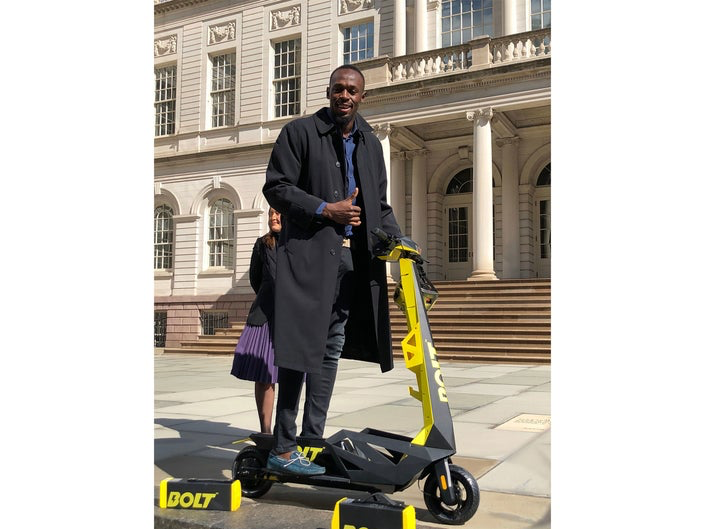 NEW YORK CITY HALL — Even one of the world's fastest men has to take a load off. An electric scooter firm enlisted the record-setting sprinter Usain Bolt on Tuesday in its push to legalize the vehicles in New York.

The Olympic gold medalist from Jamaica is the new global spokesperson for Bolt Mobility, which has about 1,000 scooters on the streets in Florida and Virginia. The Miami Beach-based firm wants to bring its heavy-duty "Chariot" model to New York City, where e-scooters are currently illegal to ride.

A state proposal to allow them would cap their legal speed at 20 MPH — far slower than Bolt's top footspeed of nearly 28 MPH. But the retired runner said the scooters can help riders get around nasty traffic in New York and other big cities.

"The first thing people always say to me when I get somewhere late is that, 'Why didn't you run?'" Bolt said. "So now I actually have the Bolt scooter to get there quicker."

Bolt is among several e-scooter companies seeking entree to New York City amid the legalization push. The firm has a fleet of about 450 scooters in Fort Lauderdale, Florida, and 300 each in Alexandria and Arlington, Virginia, said Will Nicholas, Bolt's vice president of operations.

A Bolt scooter ride costs $1 plus 15 cents per minute, Nicholas said. The company argues it could offer an extra transportation option for New Yorkers in neighborhoods not well served by public transit.

"Bolt is uniquely positioned as a first- and last-mile transportation option for New Yorkers across the five boroughs," Bolt Co-CEO and Chairwoman Sarah Hayes said. "We're working to build communities, support underserved neighborhoods and develop partnerships with cities to move people safely and efficiently, all while creating local jobs and protecting the environment."

Bolt designed its Chariot model to handle the city's tough streets, according to Nicholas. It has 10-inch wheels, an aluminum frame, cup holders, a storage bin and swappable batteries that can go more than 20 miles on one charge, he said. It also lets the rider stand with their feet facing forward for added stability.

While he posed for photos on a Chariot, Bolt couldn't take it or any other scooter for a test ride because they're illegal to use under state law. But that could soon change.

A proposal in Gov. Andrew Cuomo's state budget would clear the way for municipalities to allow e-scooters to be ridden locally. City Council members have also proposed legislation to legalize e-scooters that can't go faster than 15 MPH. Bolt says its scooters can run up to 30 MPH but the firm can limit their speeds.

"We're on the precipice of a major mobility change in this city, so whether it's in the next few weeks or next few months — or hopefully not the next few years — we'll remain poised to launch here as soon as possible," Nicholas said.

Clad in a button-down shirt, overcoat, Gucci belt and blue suede boat shoes, Bolt was dressed more for a scooter ride than a brisk run. He said he has five scooters at home and all his friends have one.

Bolt recalled how promptness was paramount when he was growing up in Jamaica.

"My dad was all about time. He always said, 'Be two hours early than one minute late,' so for me, time was everything," he said. "And as you see throughout my career, I always aim to run the fastest and to get there as quick as possible."

Asked by a reporter if the deluxe scooter was too slow for him, Bolt replied, "Sometimes you gotta slow down."