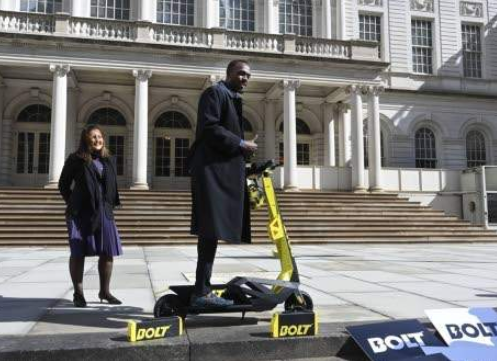 (JAMAICA OBSERVER) — Jamaican track star, Usain Bolt, was present Tuesday morning at City Hall in New York for a press conference to introduce a new scooter as an alternative form of transportation.

Bolt Mobility, a Miami-based start-up, is the creator of this new, environmentally friendly scooter called the “Chariot”, and Jamaica’s most famous athlete, who is the company’s spokesperson, explained his interest in the project.

“I’ve competed in many cities around the world and I see the demand for getting around as quickly as possible, and efficient as possible,” he stated.

The aluminum frame Bolt Mobility scooter, which lasts for up to 12 months, has switchable batteries, a storage bin, cup holders and footrests that face forward. The company is attempting to enter the New York market even while attempts to legalise scooters there are still underway.

Some of the details of the collaboration between the athlete and Bolt Mobility are still unclear at this time. Jillian Jorgensen, City Hall bureau chief for New York Daily News tweeted on social media that a question had been asked at the press conference pertaining to how much Usain Bolt is being paid to be a brand ambassador, but the vice-president of the company responded, “That’s not a question we’re taking right now.”

Bolt Mobility was founded in 2018 with the objective of revolutionising transportation in urban areas to ameliorate transit and traffic issues. It has a presence in Fort Lauderdale, Florida; Arlington, Virginia, and Alexandria, Virginia, and there are plans to expand to other cities around the United States. The scooter company prioritises safety, reduces carbon emissions, and has customised, flexible deployment plans for their scooters.

The introduction of the Chariot scooter in New York yesterday follows closely on the heels of Bolt’s joint venture with GH Mumm which saw him launch his new signature champagne, Mumm Olympe Rosé, recently in South Africa.

Following the end of his sporting career, when the athlete announced he would no longer be pursuing his dream of being a professional footballer, Bolt has shifted his full attention to business initiatives such as the collaborations with Bolt Mobility, GH Mumm and also Hublot.