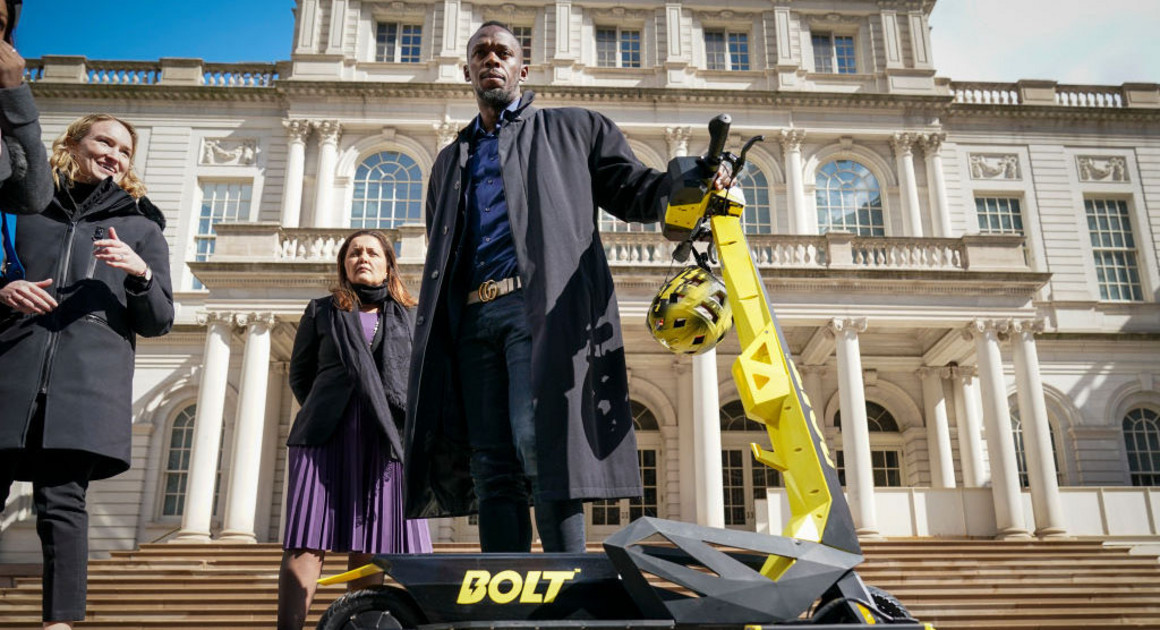 Behind him, the forbidden fruit: an e-scooter, not yet legal in New York City, its yellow and black frame sitting atop 10-inch wheels.

“The first thing people always say to me when I get somewhere late is, ‘Why didn’t you run?’” Bolt said. “So now I actually have a Bolt scooter to get there quicker.”

At his fastest, Bolt can run almost 28 miles per hour. Gov. Andrew Cuomo's proposed budget would allow municipalities to legalize e-scooters. Proposed legislation in the City Council would legalize scooters here and limit their speed to 15 miles per hour. Sarah Haynes, the co-CEO of Bolt Mobility, and Will Nicholas, its head of operations, explained that the company would work with cities and could adjust the speed of the e-scooters as necessary.

“How much are you paying Usain Bolt to be a brand ambassador?” one asked.

Another question: at the world championships in 2015, a camera operator riding a Segway lost control and knocked Bolt over, just minutes after he won the 200-meter race. Did that give Bolt, the man, any pause about the safety of e-scooters?

That was different, Bolt explained with a laugh.

“He had less control than he would on a scooter so you really can’t blame him, and he had a camera, so,” he said.

Had Bolt actually ridden an e-scooter before?

“I have five at home,” he said. “All my friends have one.” Riding one was a “comfortable” experience.

“We are proud to be a transportation solution for all generations and all genders,” Haynes said.

“Can Mr. Bolt ride this now?” asked another reporter.

“Unfortunately it’s not legal yet,” Haynes reminded the gaggle. But the company is “hopeful” legislation will pass. (Bolt has been paying Albany lobbying firm Brown & Weinraub $15,000 a month.)

The Olympian strode up to the aluminum frame of the Bolt Chariot e-scooter. Someone dashed in front and put a Starbucks cup in one of the scooter’s two cup holders. A PR rep swiftly removed the cup.

Bolt stood on the scooter and flashed a thumbs-up — but not his trademark victory pose.

The press conference came to an end.

Attendees were encouraged to check out the other models of Bolt’s e-scooters in the park. But no one was allowed to ride them.