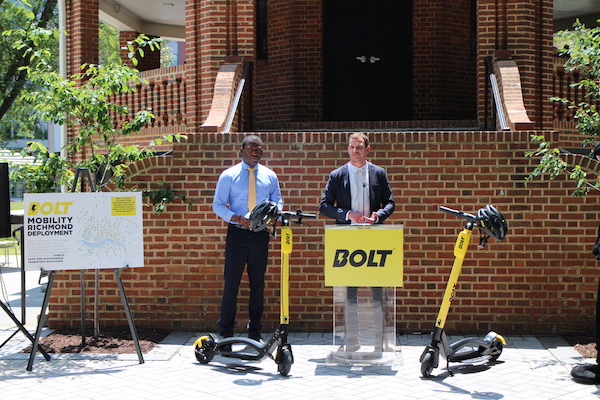 A flock of scooters has descended upon Richmond once again – but this time the city is happy about it.

Bolt has 500 scooters operating throughout the city, and they can be rented through its app. Rentals cost 25 cents per minute plus a $5 security deposit.

At a kickoff event at Monroe Park, Mayor Levar Stoney said when his administration first proposed the scooter pilot program last year, he was excited about the possibilities such devices could bring to town.

“Escooters will help us fill the gaps in our transportation network,” Stoney said.

While ceremonially handing a city operating permit over to Will Nicholas, Bolt’s executive VP of operations, Stoney laughingly said, “Now you can operate legally in the city limits.” Scooters first arrived in Richmond last August when Bird put scooters in town unexpectedly, only for the city to impound them.

Bolt is the first scooter company to be granted a permit to operate in town, though more may be on the way. Lime and Joy Scooters also have plans to launch in Richmond.

Per its agreement with the city, Bolt will be keeping 175 of its 500-scooter fleet in low-income neighborhoods, Stoney said. He added that the startup also will be offering a program called Bolt Forward, where people can apply to have 50 percent off each ride.