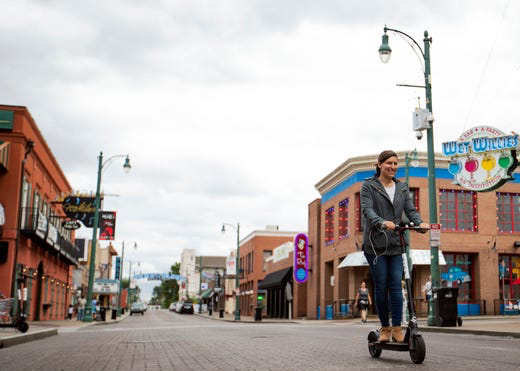 Two new scooter companies, Bolt and Spin, will soon be on Memphis' streets and the amount of scooters will likely double, the City of Memphis announced Tuesday.

The two new firms will join Lime, Bird and Explore Bike Share as the current shared-mobility options. Spin plans to launch this week, and Bolt will launch in early August.

There are about 1,000 scooters in Memphis. With the addition of the two new firms, the city expects about 2,300 will be seen in the city on average.

On-demand scooter services such as Lime and Bird have cropped up in major cities across the U.S. They operate using a mobile phone application and typically have a small fee to start and then charge per minute used.

The proliferation of scooters hasn't existed without its hiccups in other cities. In Nashville, for example, the Metro Nashville government implemented emergency rules to govern scooters after hundreds of complaints and one fatality, according to Nashville Public Radio.

The City of Memphis' announcement of the two new firms also signifies that the city's shared-mobility program has moved out of its initial pilot phase and now has a permanent structure, the city said.

Scooters, the city news release said, will comprise about 60% to 70% of the overall shared-mobility fleet. During the pilot phase, which began last year, a maximum of 1,750 bikes and scooters were allowed.

The new regulatory structures come with data requirements, too.

"Through the permanent program, operators must submit robust real-time data to the City to ensure that various requirements are met," the City of Memphis said in its news release. "The City will use this data to enforce regulations around fleet caps, parking, and areas of restricted use. The data will also allow the City to analyze the performance of the shared mobility services and verify if goals of the Program are being met."